The Festival is held on an Organic Historic Working Farm with "kids' areas", the biggest swing on the Island, farm animals, gardens, produce, fields and woods

2022 will feature many popular artists from past years and some new faces to add to the musical fun!

The performing groups include, The Haymakers, The New Students, Buddy Merriam and Taylor Ackley, CJ's Say Hey Crew, String Sisters, The Serpent and the Fiddle, Pick of the Crop

On the Shady Grove Stage: A Pick of the Crop event where we will pick next year's stage performer and more!

We will have a few stages including an open mic stage on the back of a '24 Model T Truck!

Bring your instruments and sing along.

Advance Ticket Sales are over 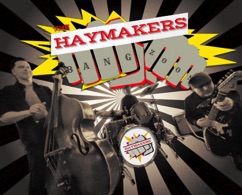 Like a giant, cool glass of country-fried, musical swamp juice, The Haymakers combine some of music’s most undeniable elements and vintage vibes to capture the spark of America’s greatest artists and music. While they draw their inspiration from the best of rock, country, blues, rockabilly, swing and jazz influences, they combine it with a contemporary style to deliver something familiar yet fresh; a high-octane, crowd-pleasing, foot-stomping jumbo of good ol' rock & roll!

Formed during all of the craziness of 2021, Chris James (guitars & vocals), Tom Hopkins (upright bass & vocals) and Mark Pohl (drums & vocals) joined forces after crossing musical paths for many years while playing in some of Long Island's best bands including; Rhythm Bound, The Hideaways, The Lone Sharks, The Last Hombres, The Bobby Volkman Trio, The Rodeo Clowns, The Buzzards, among others to form The Haymakers.

Get ready to rock and roll!!!

The New Students perform original songs in an eclectic blend of folk, roots, bluegrass and Americana traditions. Tight three-part vocal harmonies, skilled acoustic instrumentation, and thoughtful lyrics make up their signature sound that has been delighting East Coast audiences for over a decade.  Together they have recorded three studio albums of original songs and one “almost live” album recorded remotely while in quarantine in 2020.  In coffee houses, concert halls and Broadway stages, the members of The New Students have collaborated with the likes of Peter Yarrow and Noel Paul Stookey (Peter, Paul and Mary), George Grove (The Kingston Trio), and Elvis Costello.  Combining poetry with conscience, humor with integrity, and—most of all—classic with modern, The New Students evoke the pioneering spirit of the 1960s.  Truly, they are new students of an old school. 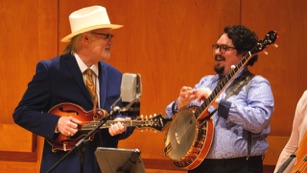 Buddy Merriam formed his band, Back Roads in 1980 and has performed at the Grand Ole Opry in Nashville, the Grand Opening of the Bluegrass Museum and Hall Of Fame, Country Music's Fan Fair in Nashville, Grey Fox & Podunk, International Bluegrass Music Association's World of Bluegrass Show in Owensboro KY, Fan Fest in Louisville KY and at too many Long Island venues to list.

At the 2015 F&FF, he was honored to receive the "Long Island Sound Award" from the LI Music Hall of Fame "For Outstanding Contributions to Long Island's Musical Heritage.”

Taylor Ackley is a scholar, composer and performer of American Roots music, whose research works to understand and analyze American Folk and Roots music as art grounded in the experiences of poor and working-class people. He has presented papers at a number of conferences and panels including the International Bluegrass Music Association and the Northwestern Chapter of the Society for Ethnomusicology and is also in demand as a guest lecturer at colleges and public institutions. As a composer, Taylor has been commissioned by a number of soloists, chamber ensembles, choirs and jazz bands. His music has been featured in festivals throughout the United States as well as Denmark and China, and at our very own F&FF as the leader of the Stony Brook Roots Ensemble.

Jacobs natural inclination for and soulful amalgamation of the sound and energy of Blues,

Gospel, and Jazz. Infuzed, marinated, and gathered from the diverse influences from within

her childhood home and from the ether at large. A musical colleague recently exclaimed,

upon hearing this new collaboration, “THIS is where you should be, your musical home.”

Keenan Zach on Bass and Dr. Dan Weymouth on piano/organ.

New York native Annie Mark moved to the South at age 10, where she nurtured a life-long love of traditional country music and songs that convey slice-of-life stories about people’s lives with a heartfelt simplicity. Accompanied by strong and tender acoustic guitar-playing, Annie's richly textured voice runs the entire emotional spectrum– sometimes velvety smooth, at other times raspy and raw with a little torch and twang thrown in.

One of the most evocative performers of clawhammer (drop-thumb) banjo in the modern age, Maria Fairchild brings subtle sophistication to this ancient technique. In her capable hands, her instrument's voice is rich and mellow, a far cry from the twangy plunk usually associated with old-timey banjo. Add vocals that are clear, warm and pure, and the result is outstanding

The Serpent and the Fiddle

Bob Westcott: will emcee and entertain between sets with stories and song.